For understanding the climate processes at the Earth-atmosphere interface, an accurate knowledge of the spatio-temporal distribution of downwelling solar radiation and of its diffuse component at the surface are essential. LSA SAF MSG Total and Diffuse Downward Surface Shortwave Flux (MDSSFTD, LSA-207) product is updated every 15 minutes and provides information of total (DSSF) and fraction of diffuse (FD) surface solar flux measurements on MSG disk area.

If a station is located at some particular basins, night radiative fog can form due to radiative cooling. This fog forms when the temperature meets up with the dew point. Radiative fog layer, especially on a satellite sub pixel scale, can cause discrepancies between satellite derived downwards shortwave flux and in-situ measurements. An example of this event can be regularly observed at the Gobabeb station (Namibia). We compared satellite and ground measurements for the period of two years, 2017 - 2018. We noticed some discrepancies between satellite and ground measurements that we couldn’t easily explain at first. However, taking into account the position of the station (i.e. the nearby river basin), we suspected the reason for the discrepancies could be the radiative fog layer. To test this hypothesis temperature, humidity and direct sun radiation measurements were used to verify station atmospheric conditions. 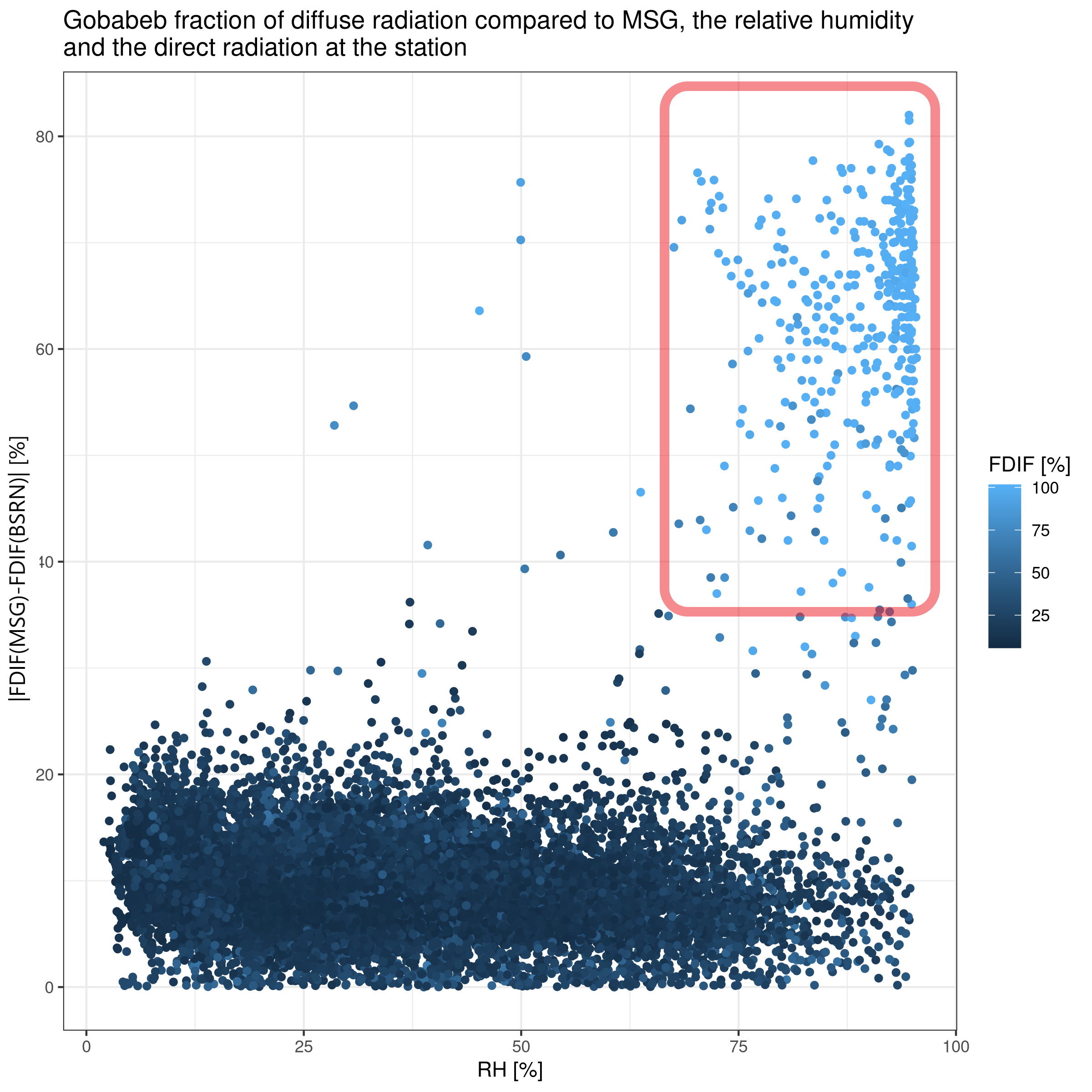 Scatter plots at Fig. 1 present clear sky condition data, since it is easier to spot any significant deviations from statistics when only clear sky condition data is selected. The data before implementation of the filter for the radiative fog layer are plotted in the upper row, whereas the data that was filtered according to the radiative fog layer are plotted in the lower row. We notice multiple outliers (upper row) that are later filtered out (lower row). Since the density of outliers is quite low, we don’t observe noticeable shifts in the linear regression lines, although the shift is more obvious for FD than DSSF. In Fig. 2 absolute difference between satellite and in-situ fraction of diffuse radiation against relative humidity is plotted. We see that the majority of outliers occur when relative humidity is very high, which is expected for the fog.

Thin fog layers remain challenging for satellite cloud mask classification, especially when they occur at the subpixel scale. Here we presented how at certain conditions a radiative fog layer can form and cause measurement problems. With Meteosat Third Generation the spatial resolution will be higher. Consequently, small fog areas will be easier detected, which will improve all satellite products which have a cloud mask as one of the important inputs of the algorithm.