A prolonged period of warmer-than-average weather over Europe in March and first half of April 2017 came to a halt after polar air mass rapidly moved southwards from N/NE of the continent. This event resulted in one of the worst frost damage in recent years. It affected vegetation, which was already in bloom over larger areas of Central, Western and Eastern Europe. Particularly hard-hit were areas with fruit cultivation, e.g., apples, grapes, pears and cherries. 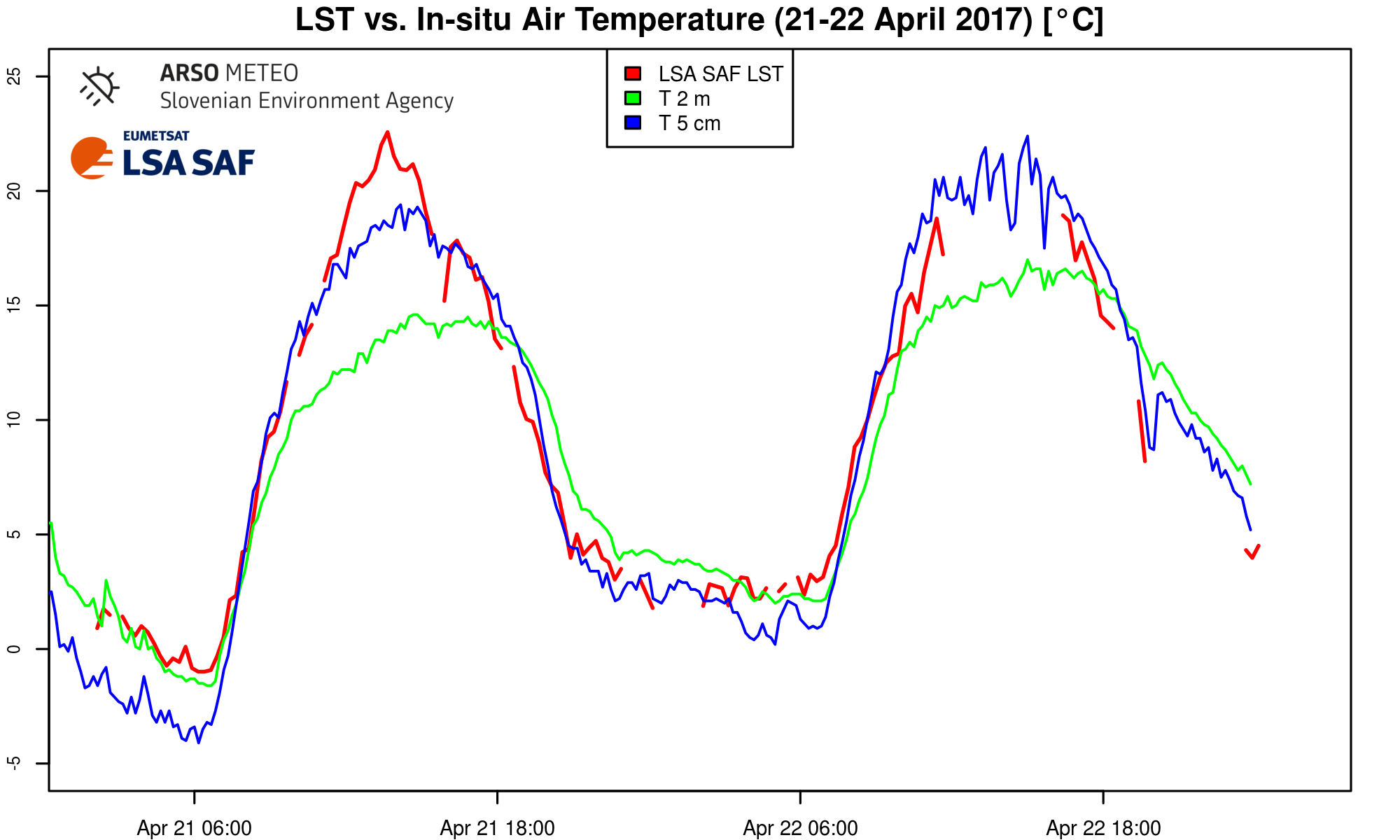 Air and ground temperature recordings from in-situ monitoring stations help identifying locations hit by the freezing temperatures. Air temperature is most commonly measured 2 metres above ground. This can be representative of frost exposure on many types of fruit trees, while air temperature closer to the ground is representative of various types of vegetables that grow on the ground. The first figure displays measured air temperature at two different altitudes from in-situ station in the coastal part of Slovenia (indicated as a black dot on the map) and the corresponding values of land surface temperature derived from geostationary satellite Meteosat (LSA SAF LST product available every 15 minutes) for 21-22 April 2017. As can be seen from the figure, in-situ air temperature at 5 cm is quite comparable with satellite measurements, although there is a disagreement between the two for morning and noon values on 21 April 2017.

LSA SAF LST is very useful to assess regional effects of frost on vegetation. For this purpose we can study minimum temperature (shown for 21 April 2017 on a wider European domain with zoomed-in area over Slovenia) and the duration of night-time frost exposure as a measure of frost severity. We defined the latter as a number of hours when temperature fell below 0°C from 0 till 6 UTC. The two figures clearly indicate most of Slovenia experienced prolonged sub-zero temperatures on 21 April 2017 apart from the coastal areas. Satellite information helps differentiate areas with sub-zero temperatures from those with no frost exposure, particularly in areas with limited in-situ coverage. 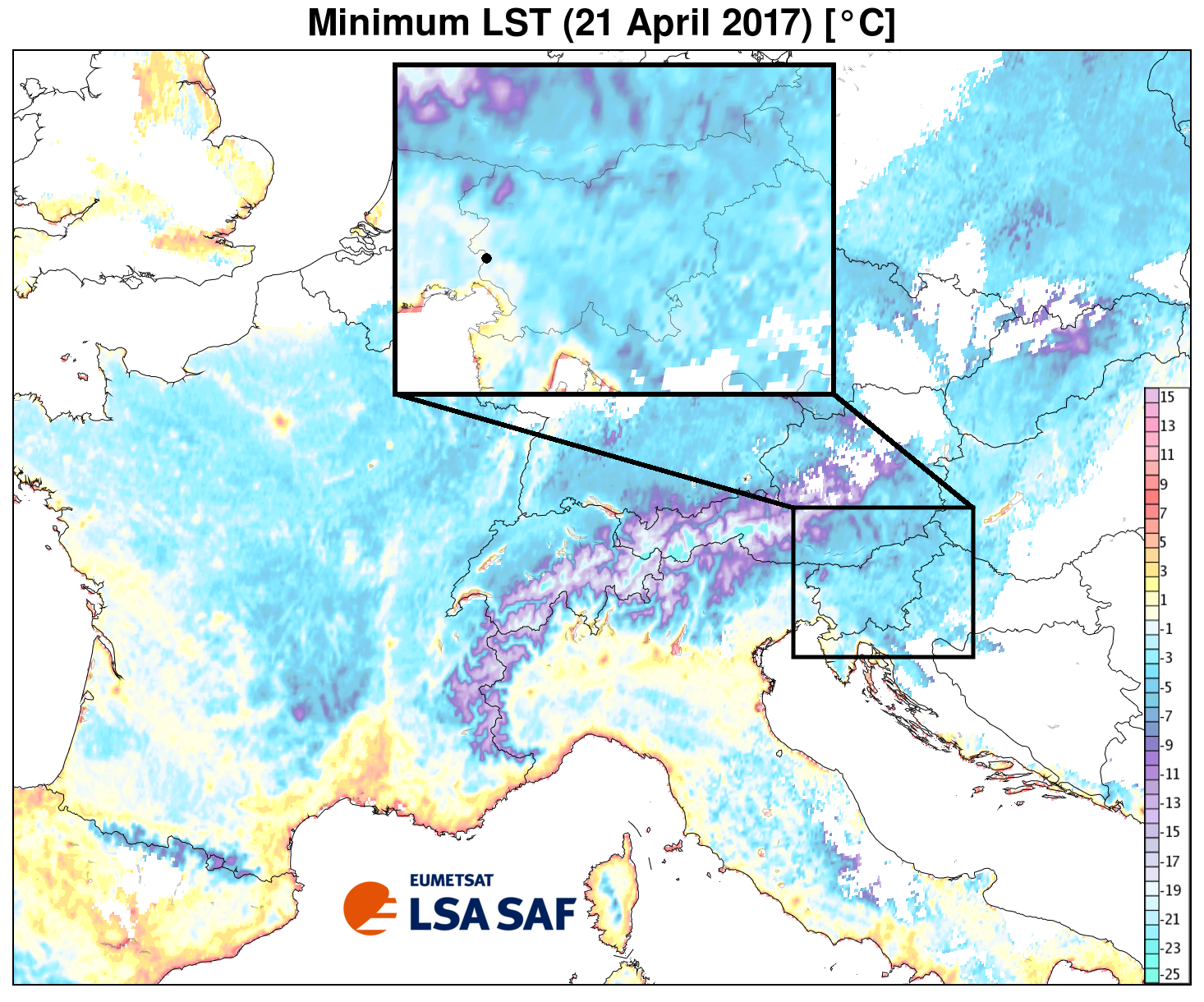 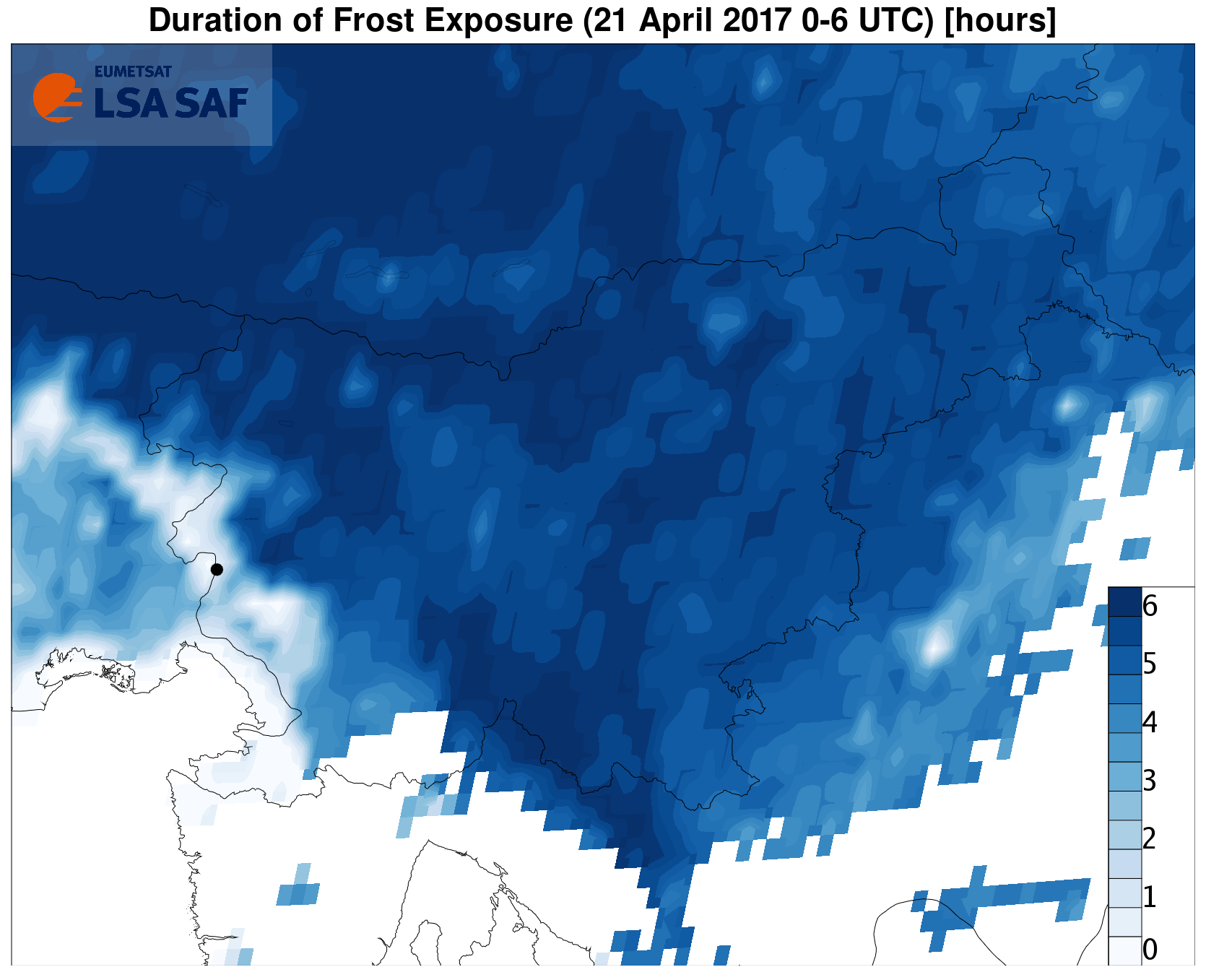 Frost damage depends to a high degree on the type and variety of plants grown locally as plants have a very different vulnerability to frost. To further complicate matters, sensitivity to frost depends greatly on the plant development, i.e., its phenological phase. So, to accurately assess regional effects of frost damage on vegetation one can combine local data (both type of plants and in-situ temperature) with satellite data to have a better understanding on the spatial extent of the frost exposure.