Examples of Romania, Bucovina and Slovenia, Nova Gorica for years 2020 and 2013.

Evapotranspiration plays a crucial role in the recycling of precipitation, in soil water availability and consequently on food production. It depends mainly on the solar energy available to vaporize the water, on water content in the soil layers and on land cover types (like vegetation, open water, bare soil, etc.). Because of the dependence on solar energy, daily actual evapotranspiration (DMET, LSA-312) varies with latitude, season of year, time of day, and cloud cover. To allow the estimation of the evaporative demand of the atmosphere independently of crop type, crop development or management practices, the concept of reference evapotranspiration (METREF, LSA-303) was introduced. METREF corresponds to the evapotranspiration from a theoretical reference surface (covered with grass 12 cm high and without water stress) under the given down-welling short-wave radiation.

Keeping in mind that DMET and METref do not refer to the same land cover, a comparison between them can nevertheless be meaningful. METREF for 15 August 2020 is presented on map over Southeastern Europe (Fig. 1). Markers points two cities - Nova Gorica in Slovenia and Bucovina in Romania. In Nova Gorica METREF was around 4.5 mm, while in Bucovina it was around 3 mm on 15 August 2020. It tells us that in idealized conditions on the square meter area of reference high grass land the combined effect of evaporation and transpiration would be 4.5 and 3 liters of water in Nova Gorica and Bucovina, respectively. Such data in combination with precipitation can be useful for instance to properly manage irrigation systems for drought prevention. 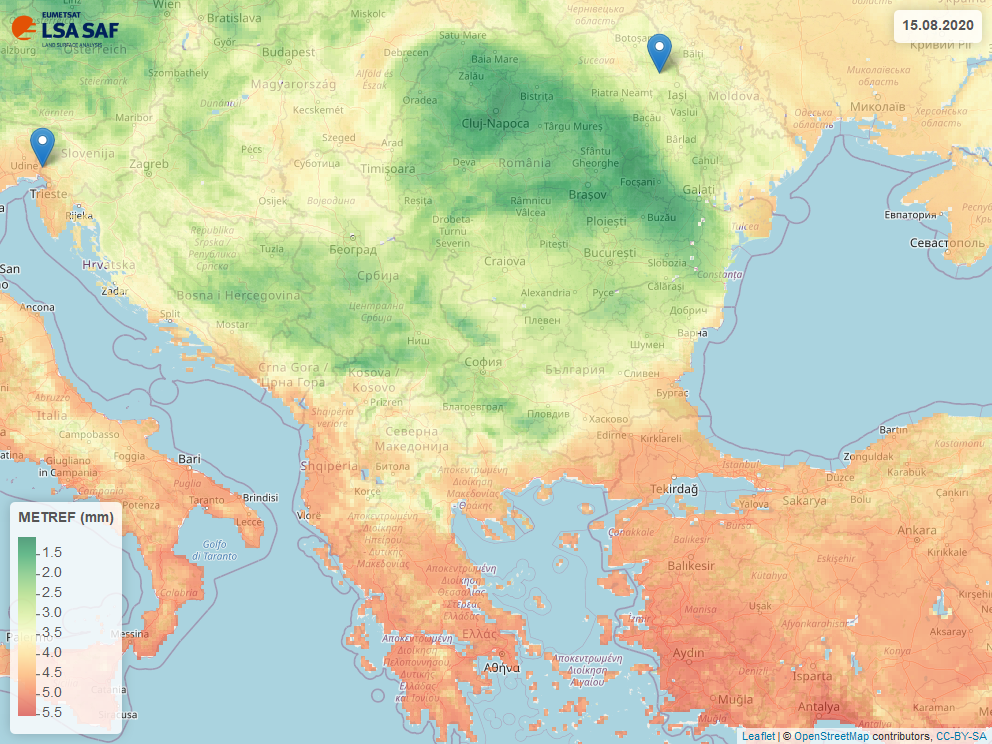 Figure 1: METREF for 15 August 2020 over Southeastern Europe. Markers points cities of Nova Gorica in Slovenia and Bucovina in Romania.

Discrepancy between daily accumulation of reference evapotranspiration and daily accumulation of actual evapotranspiration (in following lines referred to as METREF and DMET, respectively) is an indicator of water deficit, sometimes even before vegetation is under drought stress. Making this comparison is also important for monitoring soil moisture indirectly. Here we present discrepancies between METREF and DMET for cities marked in Fig. 1 (Romania, Bucovina and Slovenia, Nova Gorica).

Another way to follow the differences between METREF and DMET is to plot time series for both products as shown in Fig. 3. Red ellipses mark times at which discrepancy between DMET and METREF was large and vegetation was therefore in drought stress. Similarly to Fig. 2, we are able to observe cases when values of DMET and METREF are mostly quite similar (Bucovina, 2013 and Nova Gorica, 2020) or significantly different in the dry periods (Bucovina, 2020 and Nova Gorica, 2013). 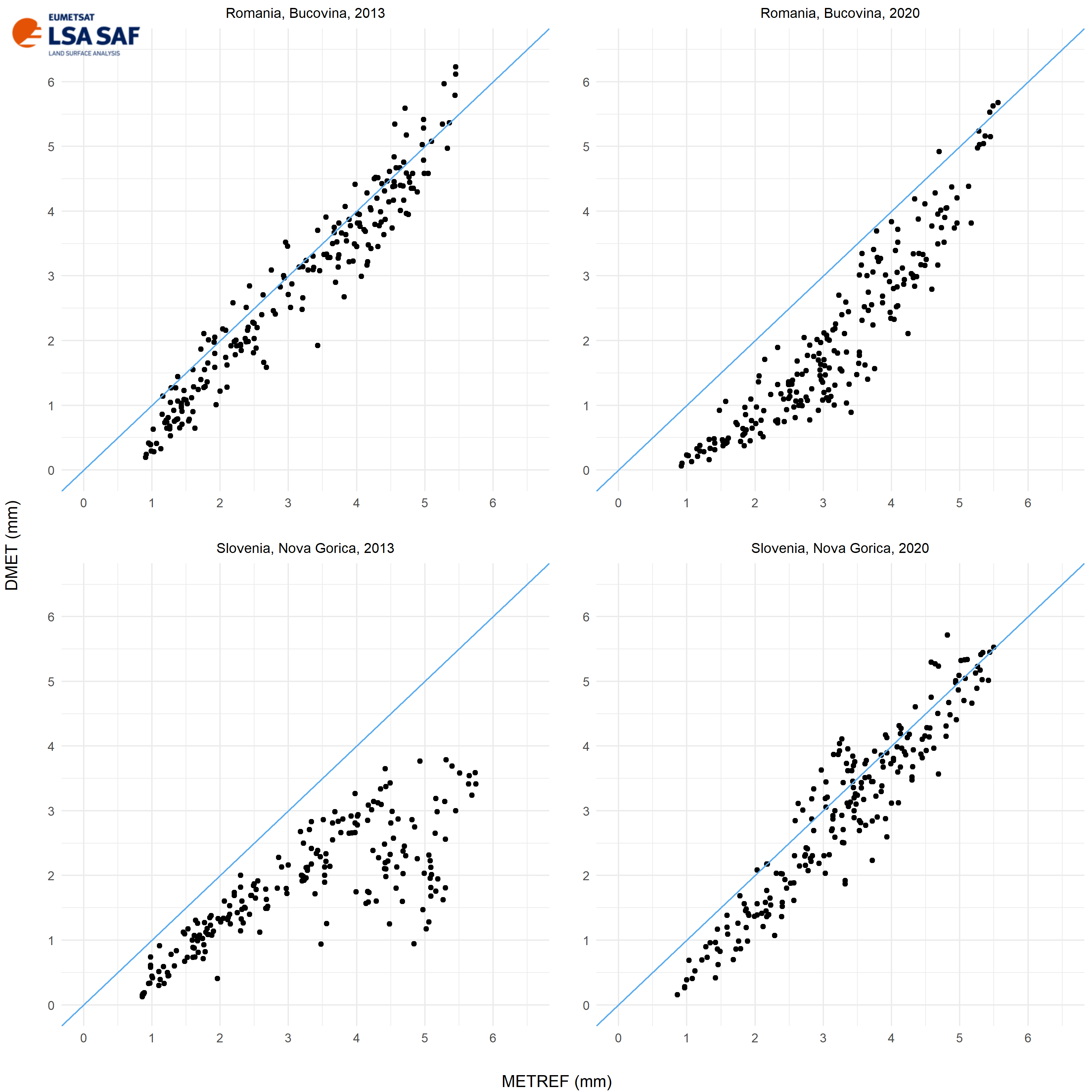 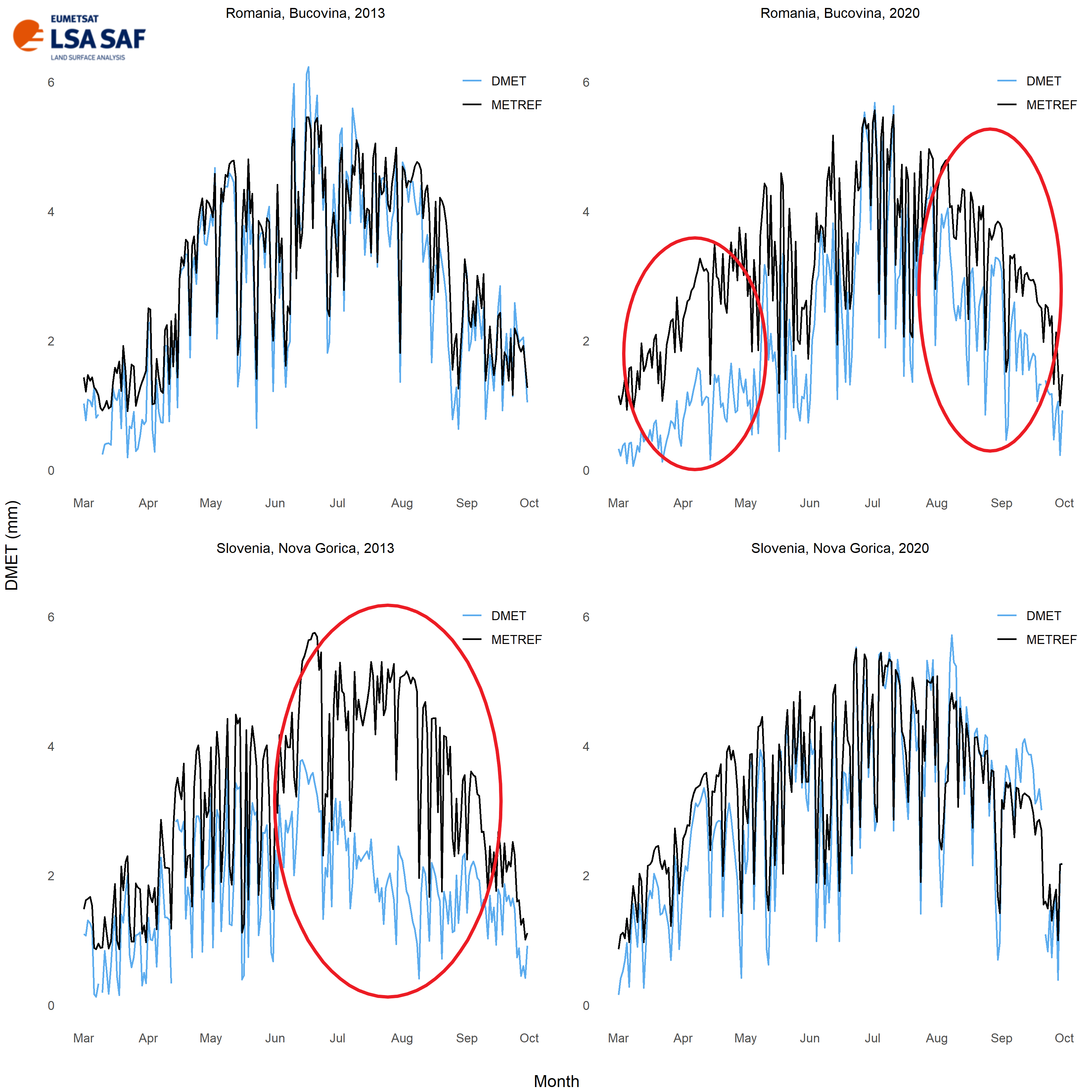