Drought in SE Europe in August 2020

FVC anomaly as an indicator of drought in Romania

Fraction of vegetation cover (FVC, LSA-421) is a vegetation product based on multi-channel remote sensing measurements derived from Meteosat geostationary satellite. It gives information on the fraction of ground unit area covered by green vegetation, which is relevant for applications in agriculture, forestry, environmental management and land use. It has also proved to be useful for drought monitoring. Values vary according to the vegetation stage and of course to the damages of possible natural disasters influencing the vegetation. Values close to 1 correspond to whole area covered by green vegetation (green in Fig. 1), whereas on the contrary areas with vegetation in senescence (red in Fig. 1) have values closer to 0.

In August 2020 rainfall rate was again well above-average over western half of the region from Hungary to continental Greece. However, August counts as another consecutive dry month over eastern part of the region from Moldova to eastern Bulgaria and over central Turkey, while in certain locations the precipitation deficit of this month classified among the driest 5% of the local records. In eastern Romania rapeseed, peas and corn were among the most affected agricultural crops in 2020 due to drought. More on topic can be read at Drought Monitoring Center for SE Europe (DMCSEE) in Monthly Drought Bulletin (http://www.dmcsee.org/uploads/file/448_dmcsee_bulletin_august2020.pdf). The regions with drought conditions can be clearly identified in Fig. 2 having negative values of FVC anomaly.

FVC anomaly (difference between current vegetation in 2020 and its long-term average in 2004-2017) are shown for August. Only absolute values of negative anomaly are shown in Fig. 2 and they serve as an indicator that vegetation is in stress condition. 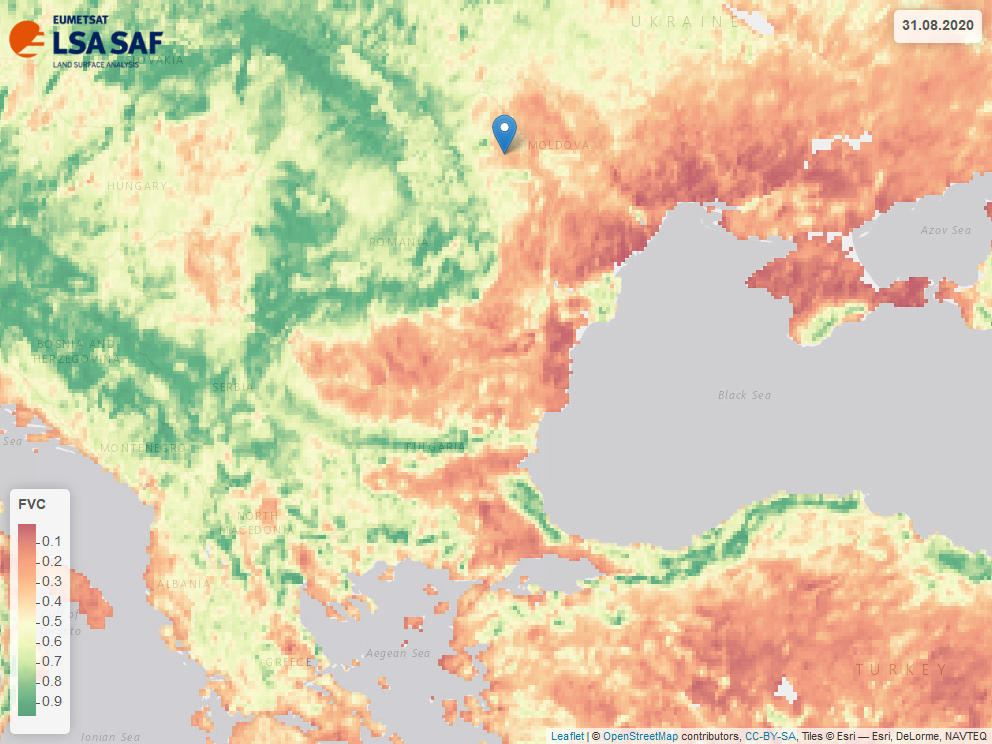 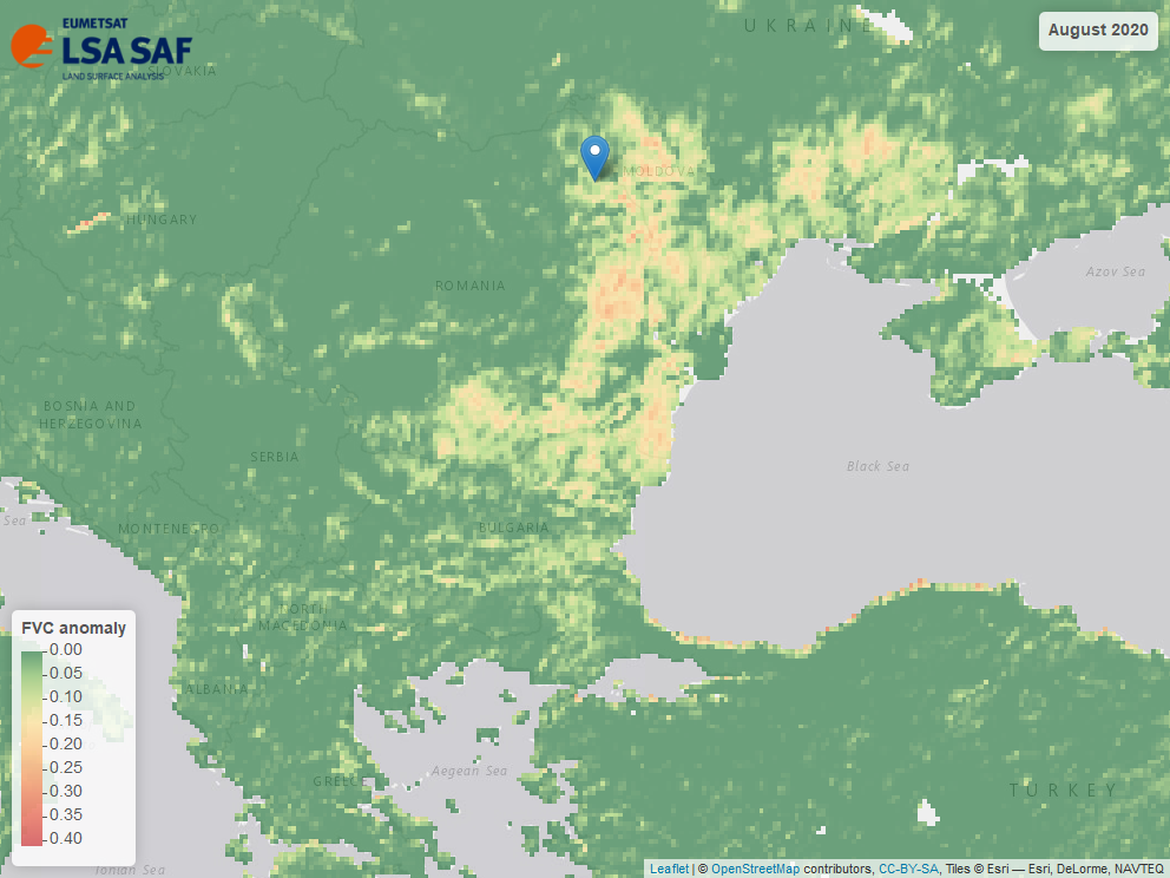 Figure 2 - FVC anomaly in August 2020 as compared to long-term monthly average in 2004-2017 period over SE Europe showing drought affected areas. The blue marker points the location in Bucovina, Romania, where drought was monitored.

Daily variation of FVC for vegetative season 2020 in Bucovina, Romania

Products derived from geostationary satellites have a significant advantage as compared to products derived from polar-orbiting satellites in terms of temporal resolution. Thus, we are able to observe day-to-day changes in vegetation in the case of FVC derived from the Meteosat geostationary satellite. For a location in Bucovina, north Romania, daily FVC is shown in Fig. 3. FVC daily values compared with the reference (daily average in the 2004-2017 period) gives a good indication of vegetation conditions during the growth season. Fig. 3 shows boosted vegetation development in the beginning of vegetative season 2020, although the lack of rain throughout spring months hindered its further growth. There is again some vegetation boost in June, but dry July and August accelerated vegetation senescence. FVC values at the end of August stand at the level of FVC normally reached in October time. 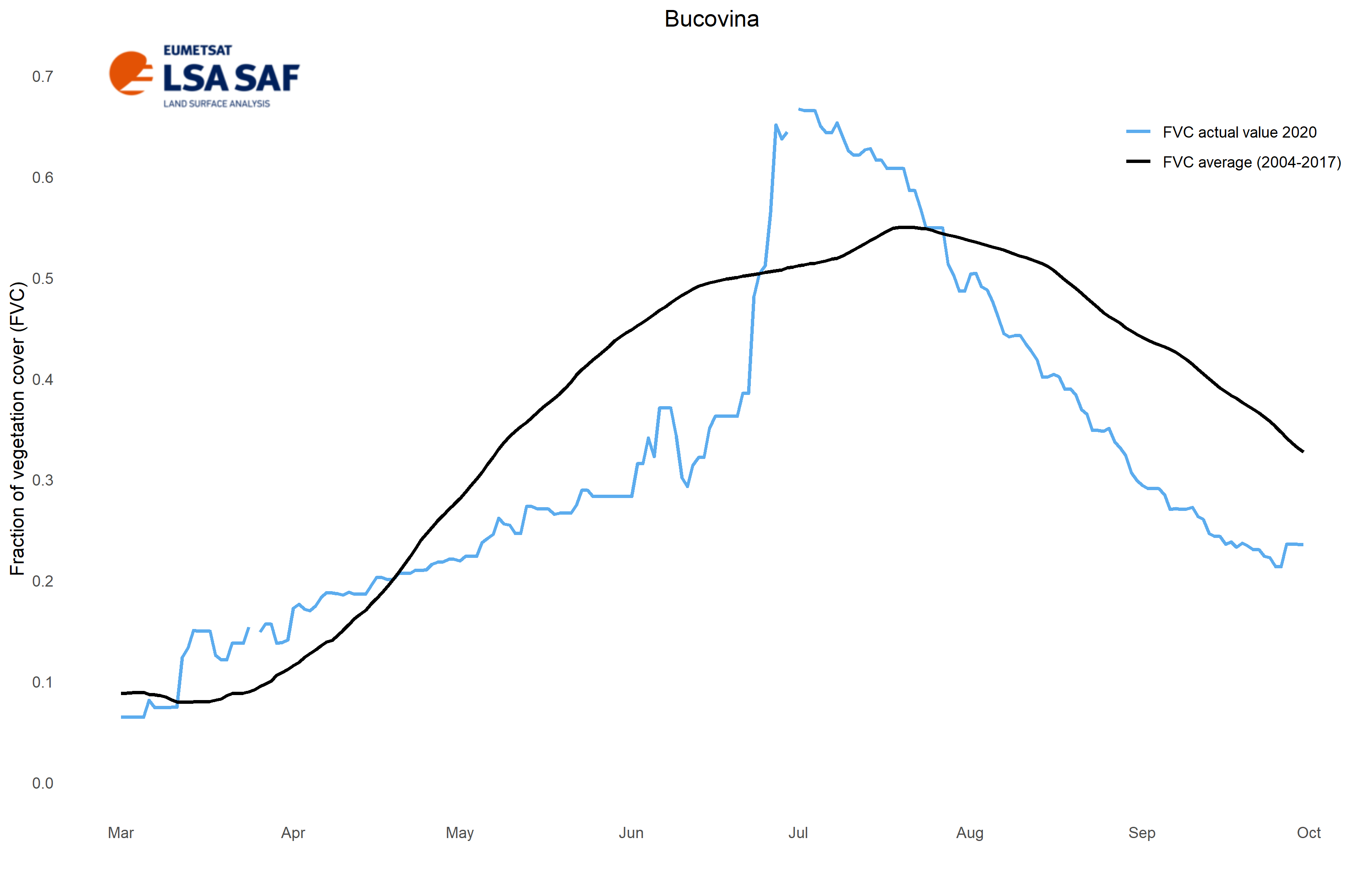