Example of Etna activity in February 2021

In 2020 there were some sporadic eruptions of volcano Etna in South Italy’s island Sicily. Gradually increased activity has been detected from December 2020 and has been more intensive and frequent in the second half of February, which is presented below. Satellites can be used to detect several different gasses and ash in the atmosphere. Here the focus was on Fire Radiative Power Pixel (FRPPIXEL, LSA-502), which is primarily made for fire detection, but can also be used to detect lava from volcanic eruption.

Atmospheric SO2 detected during the eruption

Short eruptions of ash and gas in the atmosphere were detected in 21 - 22 December 2020 and 18 January 2021 with Meteosat imager at the EUMETSAT link1 following by several sporadic eruptions in January. In February and March 2021 activity was quite intense. See the overview on EUMETSAT link2. Volcanic SO2 cloud path can be seen from satellites after the eruptions on 16 February 2021 from 15:30 UTC to 17:45 UTC in Figure 1. The SO2 cloud was advected towards North Africa. It is possible to distinguish between ash and SO2 cloud in the atmosphere by using data from different satellite channels in IR spectrum. In the animation (Figure 1) light green color represents SO2 cloud, red is volcanic ash and violet is FRPPIXEL, LSA-502 that represents lava covered ground. More on the color representation can be found at RGB guide.

Product FRPPIXEL, LSA-502 gives an information on location, timing and fire radiative power in MWatts every 15 minutes. In this study it provides the information on lava radiative power. If the signal from the pixel is more than 40 MWatts it can detect even sub-pixel fires or lava flow. In addition, With this product it is also possible to estimate the amount of carbon released as a consequence of burning. Animation in Figure 2 presents daily maximum value of lava radiative power at Etna’s nearby pixels. Indicated is the frame of 21 x 21 pixels. It can be seen how lava covers bigger area after eruption. One advantage of geostationary satellite is continuous monitoring of conditions every 15 min.

Meteosat Third Generation satellites, planed to be launched in the end of 2022, will also impact the LSA SAF product. It will be possible to detect and monitor areas covered with lava or fire not just more accurately but also more frequently. In Figure 3 there is Sentinel-2 data with 10 meter resolution, captured lava flow on 18 February 2021 at 9:40 UTC - European Space Administration (ESA).

Figure 2 - Animation of maximal daily radiative power from pixels in MWatts at Etna’s nearby pixels from 16 Feb to 28 Feb 2021.

Detection time and maximum radiative pixel power at Etna’s nearby pixels in comparison to time of eruptions from Toulouse Volcanic Ash Advisory center (VAAC) are displayed in Figure 4. Vertical lines present official eruptions according to VAAC and red triangles present maximum radiative pixel power at given time for Etna’s region obtained from FRP product. It can be seen that after every vertical line there is a group of pixels with decaying power of radiation. Additionally, pixels representing lava are cooling down after eruption.

This analysis shows that FRP product can be used to detect volcanic eruption. Main advantage is high temporal resolution that enables to continuously monitor remote fire events or volcanic activity, as presented. Its high sensitivity as well allows to detect sub-pixel fires. 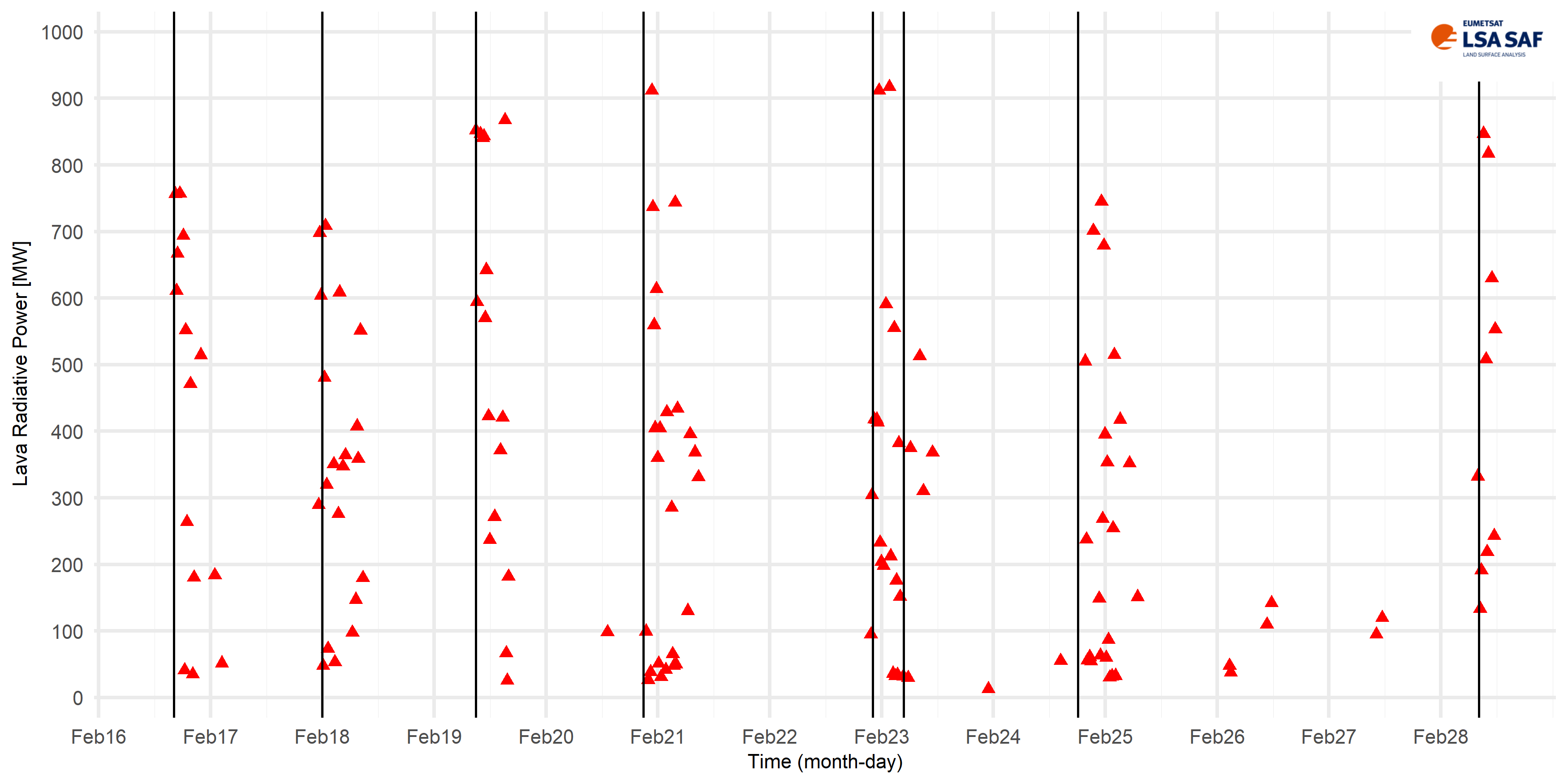