Climate change caused by humans is making heat waves more frequent, hotter and longer. One effect of this is the early arrival of long-lasting high temperatures over India, Pakistan, and Afghanistan, leading to a heat wave with a large spatial extent in March and April 2022. The hottest months for India (around May and June), are when phenomena of this nature tend to occur. In April, as the Sun moves northward, the heat in India builds up quickly as incursions of cold air are blocked by the highlands to the north.

Here we use satellite derived Land Surface Temperatures (LSTs) to investigate the exceptionality of this event when compared to surface temperatures reached in previous years.

We used LST daytime images derived by the AVHRR sensor onboard the Metop mission operated by EUMETSAT (EDLST; LSA-002), acquired at around 9h30 Local Time. Figure 1 represents the monthly AVHRR LST daytime anomalies for March and April 2022, based on the 2007-2021 reference period. This image is obtained by subtracting the median of the monthly averages from 2007 to 2021 from the monthly average of 2022. In March (Figure 1 (a)), the positive anomalies are concentrated in southeast Iran, Afghanistan, Pakistan and northern India with average anomaly values in the order of 5 to 7.5 °C. Within the red box corresponding to an area over Afghanistan, the positive anomaly reaches values on the order of 10 °C.

In April, Figure 1 (b), the positive anomalies are much more widespread, with average anomaly values in the order of 7.5 to 10 °C.

The red box in Figure 1 was used to extract a time series of AVHRR LST daytime values averaged over the box for March-April. Figure 2 shows timeseries of the mean (blue), maximum (orange) and minimum (green) LST of the reference period (2007-2021) at each day of March-April, and the respective timeseries of daily LST values for the year 2022 (red).

The year 2022 exceeded the maximum of the climatological series on several days and has, on most days, surface temperatures well above the climatology of 2007-2021 and with many days above the overall maxima from the previous years. This illustrates that these exceptional conditions not only had record-breaking daily magnitudes, but also that they covered a large period. This is of course limited by the length of the data record and to the study region under analysis.

Figure 2 – Time series of LST extracted from the red box presented in Figure 1. These values were obtained from AVHRR/MetOp.

Figure 3 – Maps of the (a) March and (b) April monthly averages of the maximum surface temperature obtained by MSG-IODC for the year 2022.

We looked further into the behavior of the daily maximum LSTs using data from the Indian Ocean Data Coverage Mission, available from August 2017 onwards. LST are derived every 15 min by the LSA-SAF and provided as a demonstration product.

The daily maximum LST was calculated with the available data for each day, and monthly averages of the daily maximum LST were performed for March and April (Figure 3), for each of the years in the available data record. In the case of 2022, in March (Figure 3 (a)), the regions of Iraq, southern Afghanistan, Pakistan, and India reached average surface temperatures of about 40 to 50 °C. For the month of April, illustrated in (Figure 3 (b)), average surface temperatures of 60 to 70 °C were reached in some Indian regions, as well as in the regions around the Persian Gulf and Horn of Africa.

To have a better perception of the exceptionality of these patterns, the differences between 2022 and the remaining years on the data record are shown separately in Figure 4 and Figure 5 ((a)-(e) 2018, (b)-(f) 2019, (c)-(g) 2020 and (d)-(h) 2021). Due to such a short reference period (2018-2021), comparisons against a more robust climatological reference were not feasible in this case. The most striking feature of these maps is that the differences over the region of interest (the box comprising parts of Northern India, Pakistan and Afghanistan) are always positive, which is also true for the southern Arabian Peninsula. This means that 2022 was the warmest year of this period for those areas. In general, the strongest positive differences occurred in April. The differences to 2021 were relatively small, indicating that 2021 had already been relatively warm in this region.

This event shows the importance of monitoring this sensible area of the globe, especially keeping in mind that many people live in the areas affected by this heatwave. EUMETSAT and Copernicus Global Land provide useful data to characterize events like this and will do for the foreseeable future, both using geostationary and polar orbiting sensors. 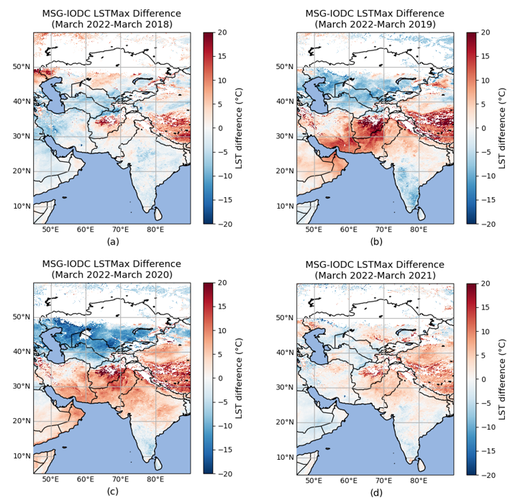 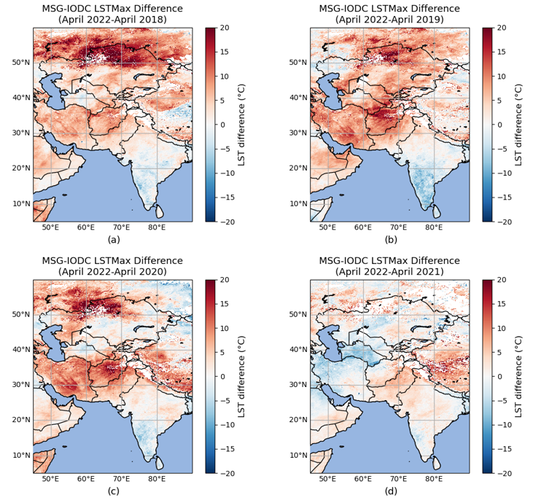