Example of the Impact of Vegetation Shadows on the Ground Measurements in Gačnik, Slovenia

Meteorological ground stations need to be situated in open places, so the impact of the surroundings on the measurements is minimal. However, at various national meteorological networks the location is not ideal. Vegetation or nearby infrastructure can cause shadows in some parts of the year which have an impact on the measurements of the ground station. In this example we will illustrate how we can detect the impact of the surrounding forest shadows on the ground measurements provided from a station near Gačnik (Slovenia).

We encountered some large discrepancies between satellite and in-situ measurements, which don’t occur due to statistical error or sensor error, but are a consequence of some physical event at the measurement site.

In Fig.1 is shown the orthophoto of Gačnik station (Slovenia) of Slovenian National Meteorological Service ground network. It shows the location of the station and a tree range on the hill on the western part of the station, which cause shadows in the evening in some parts of the year. Such shadows have an impact also on the measurements of shortwave radiation. 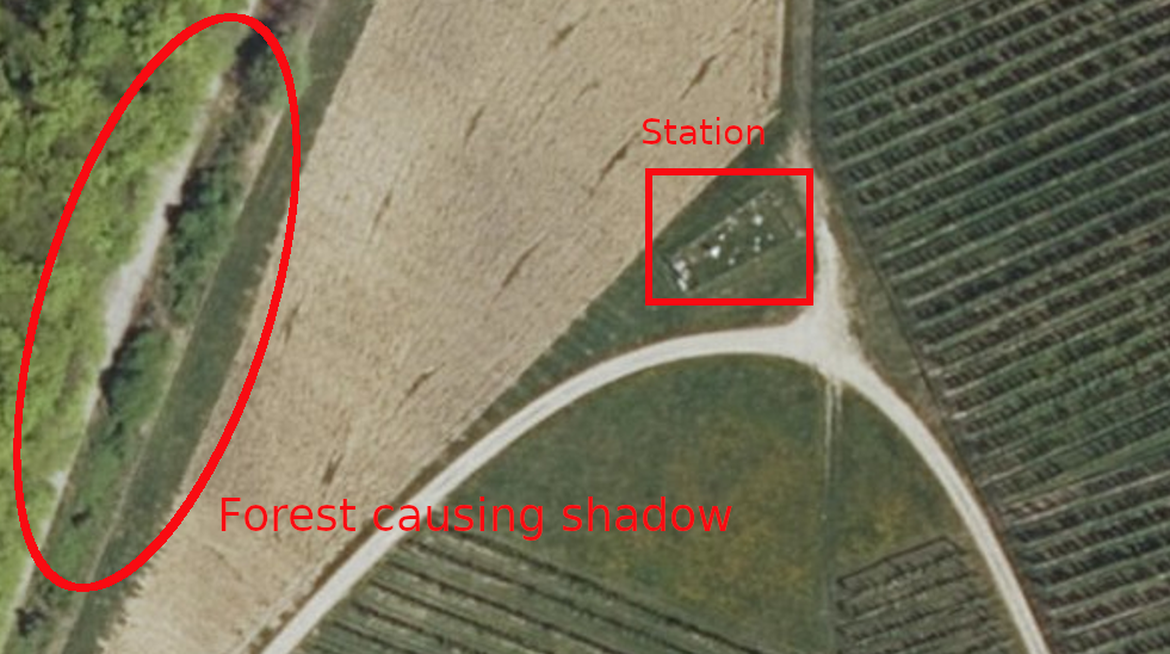 Figure 1: Orthophoto of Slovenian National Meteorological Service ground network (Gačnik). The location of the station is identified by the red square. In the west side of the station are trees on the hill (red ellipse) which cause shadows in the evening in some parts of the year. 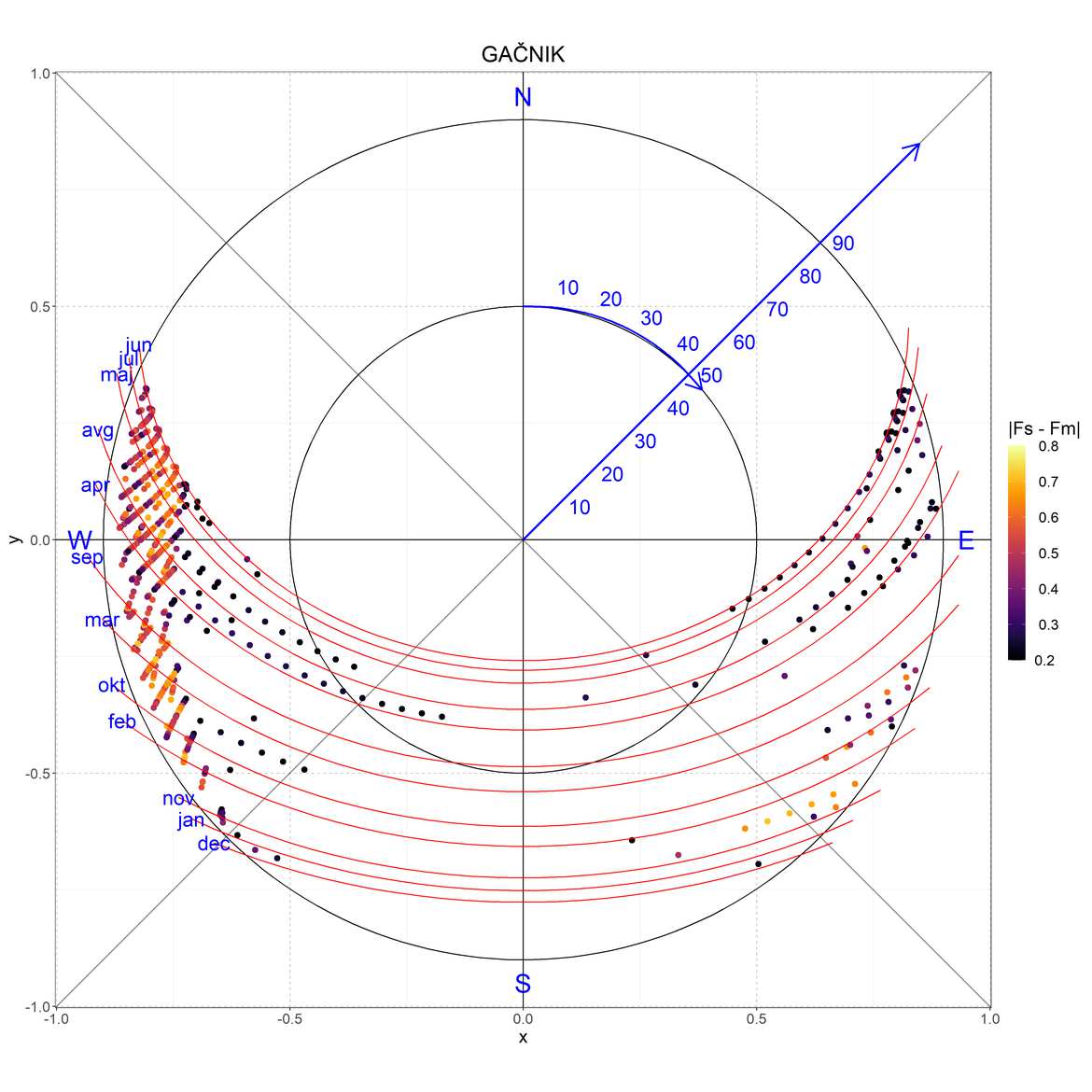 Figure 2: Outliers are presented with the wind flower graph. Azimuth angle is increasing in clockwise direction while zenith angle is increasing outwards from the center. Red paths with annotated month labels show typical sun paths for station location in the middle of each month for year 2017. Dots present values of the absolute difference between satellite fraction of diffuse radiation (Fs) and in-situ fraction of diffuse radiation (Fm).

These shadows cause hardly recognizable errors. To find them we need to take a deeper look into the data. The combination of orthophoto view (Fig. 1) and outliers of the statistics detected from in-situ to satellite data comparison (Fig. 2) guided us to this problematic feature of Gačnik station (Slovenia). After careful analysis, we found out that these outliers are the result of specific local time shadows of the nearby vegetation which caused shadow contamination on the sensor and therefore affected in-situ measured values.

Fig. 2 shows some events that deviate significantly from the expected distribution of the absolute difference between satellite and in-situ measurements of fraction of diffuse radiation (similar to the observed for direct radiation – not shown). These outliers are marked as dots with a colour scale representing the absolute differences in fraction of diffuse radiation. Red paths with annotated month labels show sun paths for the station location in the middle of each month of the year 2017, while the locations of the dots give us information about the sun position: azimuth angle increases in the clockwise direction while the zenith angle increases outwards from the center. We may notice that the majority of the outliers occur when the zenith angle is large.

Outliers that are observed in Fig. 2 are also noticeable in Fig. 3, which shows scatter plots for the total and diffuse down-welling surface shortwave flux for clear sky conditions. The upper row includes the data before implementation of the filter for local shadows, while in the lower row we have used only time slots which were not affected by the shadows. The density of measurements affected by the shadows is quite high (upper graphs). Consequently, the linear regression lines in the upper graphs are noticeably different from those in lower graphs (after implementation of the filter). 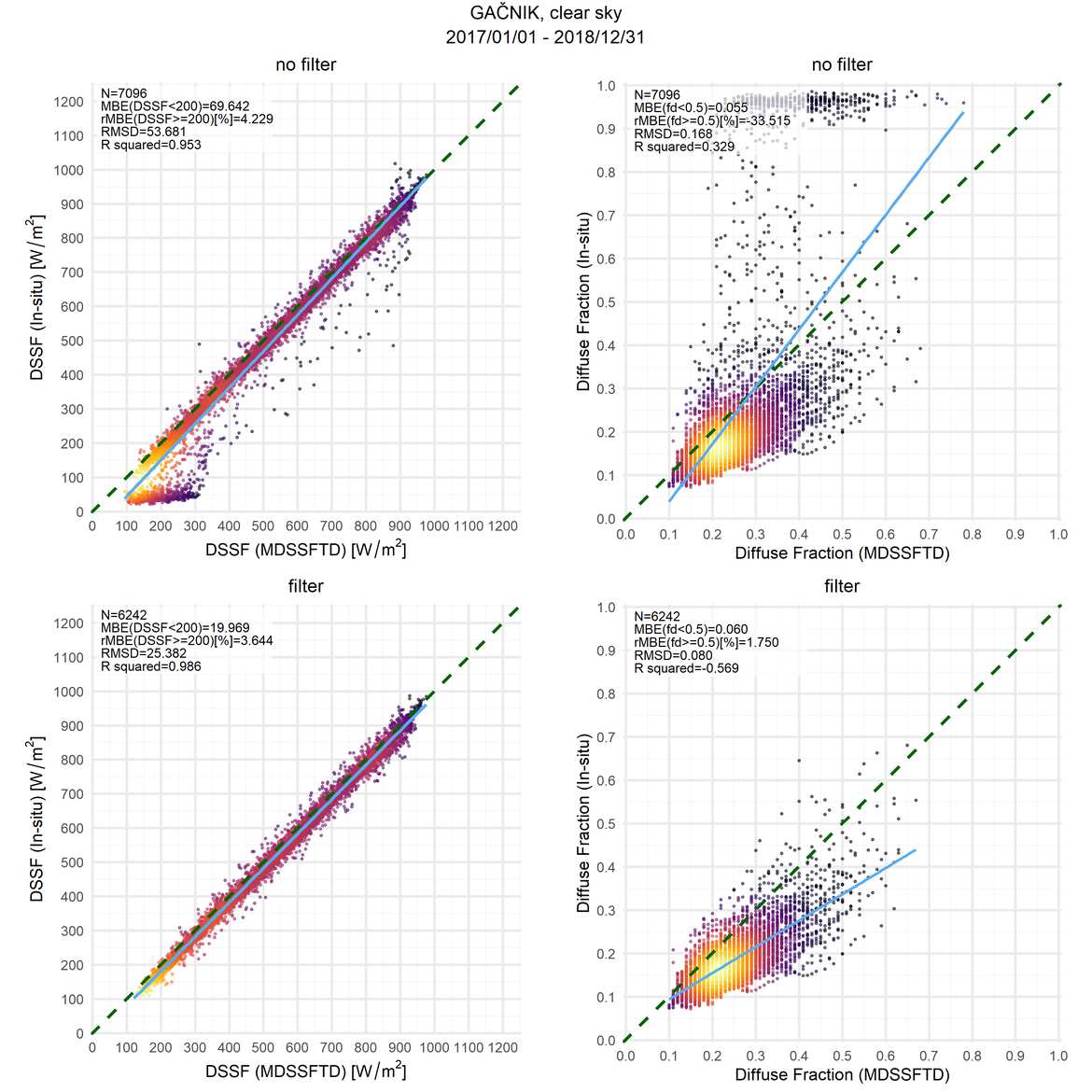 Figure 3: Satellite data (x-axis) compared to in-situ data (y-axis) for clear sky conditions. The upper row includes the data before implementation of the filter for local shadows and the lower row presents the data that was filtered to remove the local shadows. Values of satellite DSSF in comparison to in-situ DSSF data are in the left column, whereas values of satellite FD in comparison to in-situ FD data are in the right column. Warm colours in the scatterplots present a higher density of measurements. Number of measurements is marked as N on the left top corner of each graph, while other notations are well known metrics in statistics.

We have shown that satellite data can be a valuable source of information to analyse the homogeneity of in-situ measurements, which can be significantly affected by the station’s surroundings. This approach can be used to optimally prepare data for assimilation processes and nowcasting and in homogenization of data sets for climatological studies. Since the quality of the data is of great importance for accurate forecasts, analysis and studies, the inclusion of satellite and in-situ data comparison studies is an important step in minimizing systematic errors and false conclusions.