October 2017 warmer than usual for most places in Europe 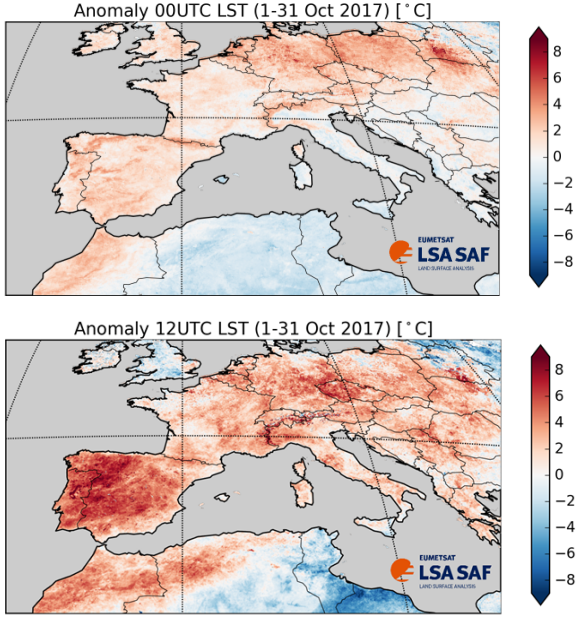 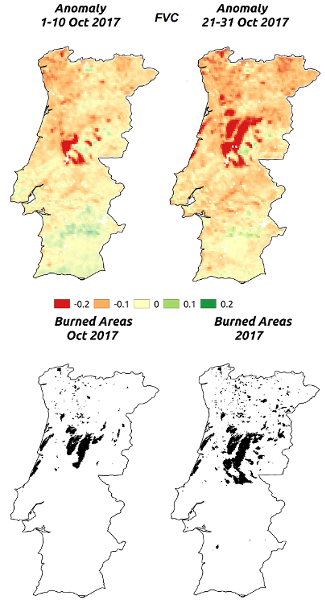 The left panel shows Land Surface Temperature (LST) anomaly values at 00UTC (top; representative of night-time temperatures) and 12UTC (bottom; representative of daytime) over Europe. Areas with higher LST values than usual are represented in red colors.  Anomalies of daytime and night-time LST in October 2017 were markedly positive over Europe. The Iberian Peninsula displays a remarkable pattern of maximum (daytime) temperature, with several “hot spots” where LST is more than 7 °C above normal (Northwestern Iberia). LST is estimated from thermal infrared radiances measured by the SEVIRI instrument onboard the Meteosat Second Generation (MSG) from 2004 until today.

On the 15th of October, Northern Portugal and Galicia were stricken by severe fire events, where large areas of vegetation were consumed. The upper figure in right panel shows the decrease of Fraction Vegetation Cover (FVC) for the first and the third decades of October. Areas with less vegetation cover than usual are represented in red. In both figures, a smooth negative anomaly of vegetation is generally consistent with the extreme LST values observed. However, a large area of FVC anomalies stronger than -0.2 in the first 10 days of October is evident and corresponds to the burnt areas of previous months (see burnt scar provided by the Portuguese authorities in bottom right panel), whereas in the last 10 days the destruction of vegetation due to the 15th fire becomes evident.