Seasonal Cycle in the Nile Valley and Delta

Satellite Monitoring of Agriculture in the Breadbasket of Egypt

The Nile valley and delta are among the first places where agriculture and civilisation came into existence. The Nile water flow with the largest inflow in the summer, because of the rainy season in the Ethiopian Highlands, supports irrigation in an otherwise very barren region (away from the Mediterranean coast the interior of Egypt has one of the driest climates in the world with precipitation barely above zero).

Satellite imagery shows a fan-like delta of the Nile with a size of about 22,000 km2 , the heart-shaped Faiyum oasis south of the delta, the Nile valley with irrigated floodplains that reach up to 20 km across the valley and the man-made Lake Nasser in the south of Egypt. Nowadays, the future of the delta is severely threatened by the rising sea as a consequence of climate change and increasing salinity. 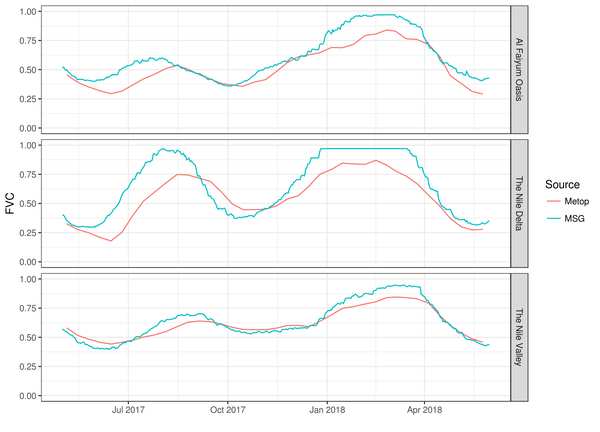 Fraction of vegetation cover (FVC), derived from both Metop and MSG satellites, displays the yearly cycle of crops in irrigated areas of Egypt. In these areas, crops are very intensively cultivated with usually at least two harvests per year. FVC yearly cycle is illustrated for both two satellite sources and shown at three different locations: the centre of the Nile Delta, Al Faiyum oasis and the north of the Nile valley (see figure on the left). The figure shows that both Metop and MSG are capable to reproduce the yearly crop cycle well although Metop‘s FVC has a coarser temporal resolution (10 days) in comparison with MSG‘s FVC (daily product). The peak FVC values are a bit higher for the MSG product. Both products are well-suited to have a general overview while for studies where higher spatial resolution is needed the Metop product should be a better option because of its higher spatial resolution.