Instantaneous Downward Surface Shortwave Flux (MDSSF, LSA-201) from EUMETSAT’s LSA SAF, available every thirty minutes, is particularly important for solar radiation forecasts and is essential information for solar power plant operators. High temporal and spatial resolution of solar radiation is of great importance for advanced end users. In this sense, geostationary measurements are the only reliable source of data for some specific applications, e.g., solar power plant production due to appropriate temporal frequency of data.

July 2018 was very hot over Central, Western and Northern Europe. In such situations, solar energy is an important component in the energy mix. During the July heat wave, solar energy production hit an all-time monthly record in Germany, which has Europe’s highest installed capacity of solar power. The animation on the left shows instantaneous radiation for 26 July 2018 and the figure on the right displays daily cumulative radiation (DIDSSF, LSA-203) for the same day. DIDSSF is a very convenient product for quick overviews, and it indicates that there was very high solar insolation over Western and Northern Europe at the end of July. 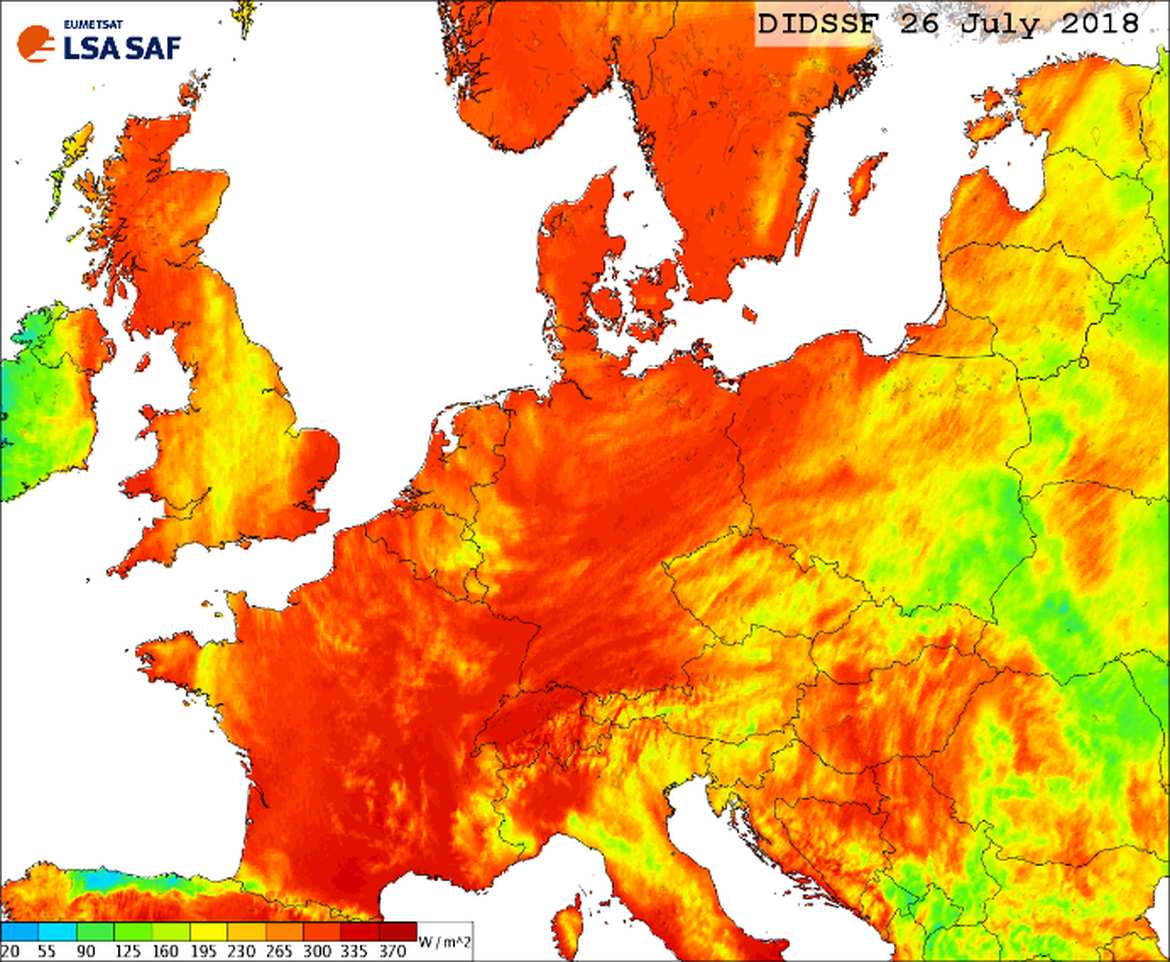 Products from the Satellite Application Facility on Climate Monitoring (CM SAF; http://cm-saf.eumetsat.int) are particularly convenient for long-term climate analyses. By merging data from the first and second generation of Meteosat, Surface Incoming Shortwave Radiation (SIS) from CM SAF has been available since 1983 and is appropriate for climate studies on the monthly level. The monthly anomaly for July 2018 calculated from long-term SIS statistics (data for the period 1983‒2017, left figure) serves to confirm that solar radiation was indeed significantly above average in Western, Central and Northern Europe in July 2018. The end of July 2018 was overall the warmest and sunniest part of the month. LSA SAF and CM SAF apply different algorithms for calculating solar radiation. However, the difference between DIDSSF on 26 July 2018 and the monthly mean of July 2018 (SIS data, right figure) reveals areas with a positive anomaly where solar radiation reached very high values on that day (in Germany, France, southern Scandinavia and Scotland). On the other hand, cloud cover over Benelux, England and most of Southern and Eastern Europe caused solar radiation to fall below the monthly mean in these regions. 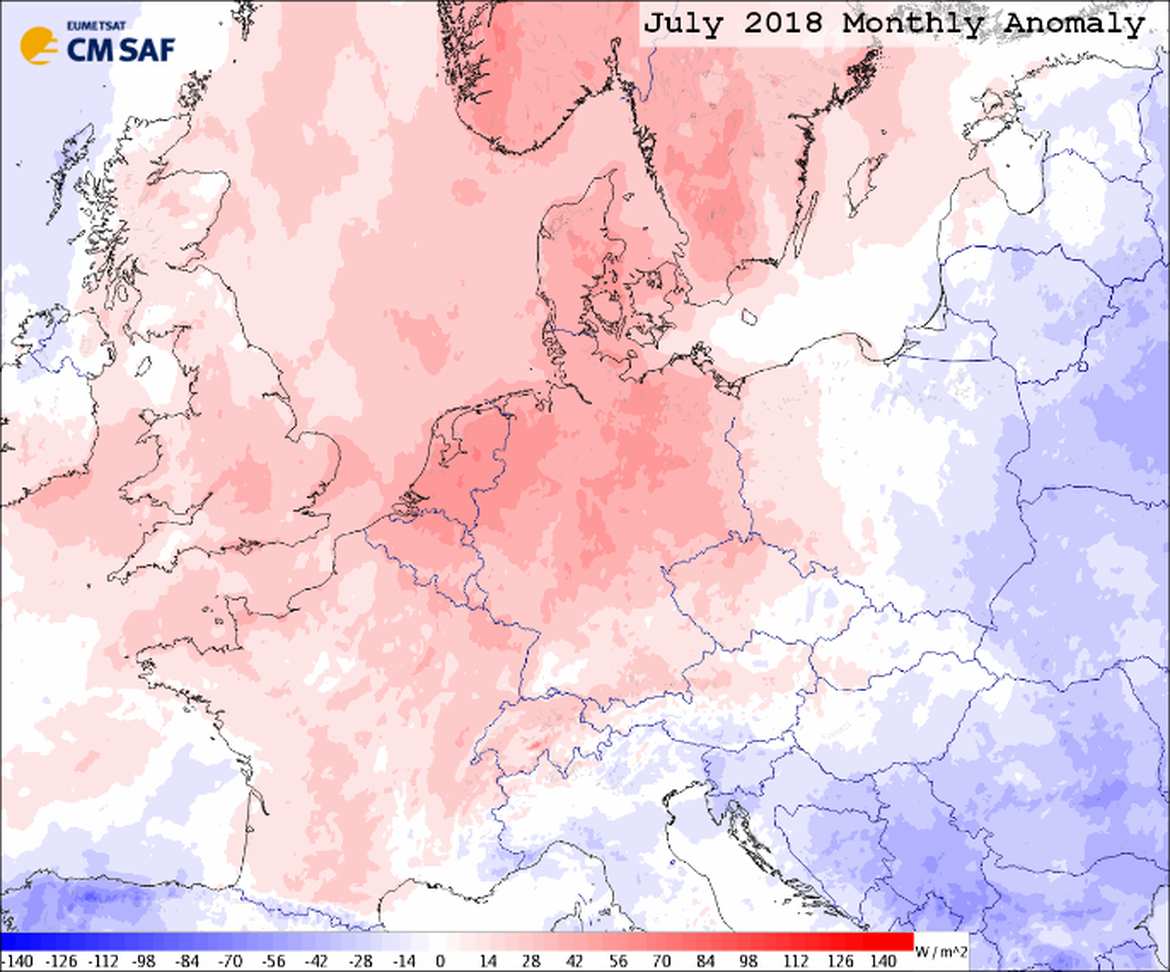 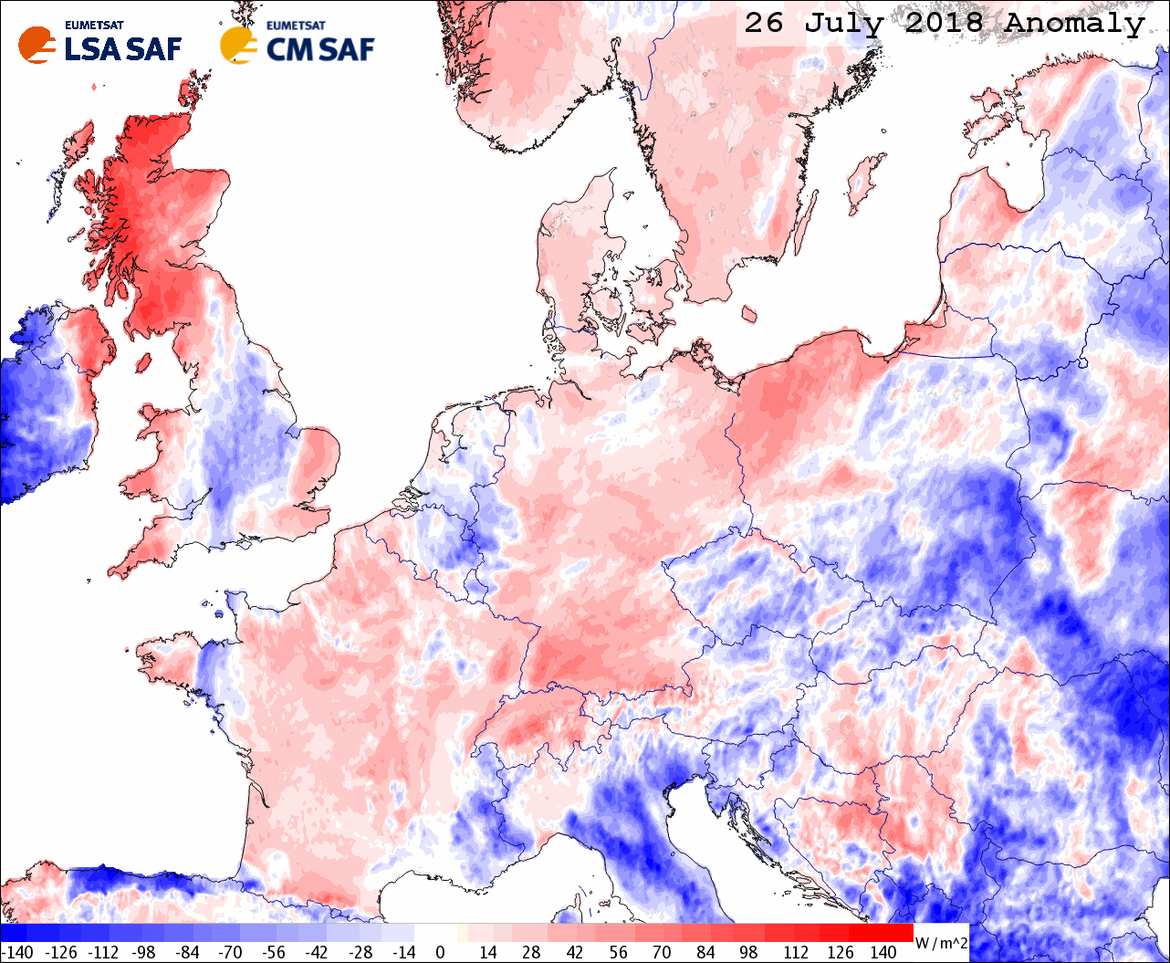