The Largest Wildfire in Slovenia in Recent Decades

After a long and pronounced dry period, the Kras border region in SW Slovenia and NE Italy experienced summer conditions that favoured the ignition of larger fires. The largest wildfire in Slovenia in recent decades broke out in mid-July 2022. We analysed the evolution of the wildfire and its radiative power using the LSA SAF Fire Radiative Power Pixel (LSA SAF FRP, LSA-502) fire product derived from MSG/SEVIRI.

The Kras region is a karst plateau with an altitude ranging from 200 m to 500 m and is located close to the northernmost shores of the Adriatic Sea. In normal weather conditions, the yearly amount of precipitation in the region exceeds 1000 mm and is about 100 mm in July alone. There was a significant rainfall shortage and higher-than-average temperatures in the months preceding the ignition of the wildfire. After the wildfire ignited in mid-July 2022 (Fig. 1), there was an international response from countries in Southern Europe to contain the further spreading of the fire. Changing wind speed and direction presented additional difficulties while trying to control the fire. 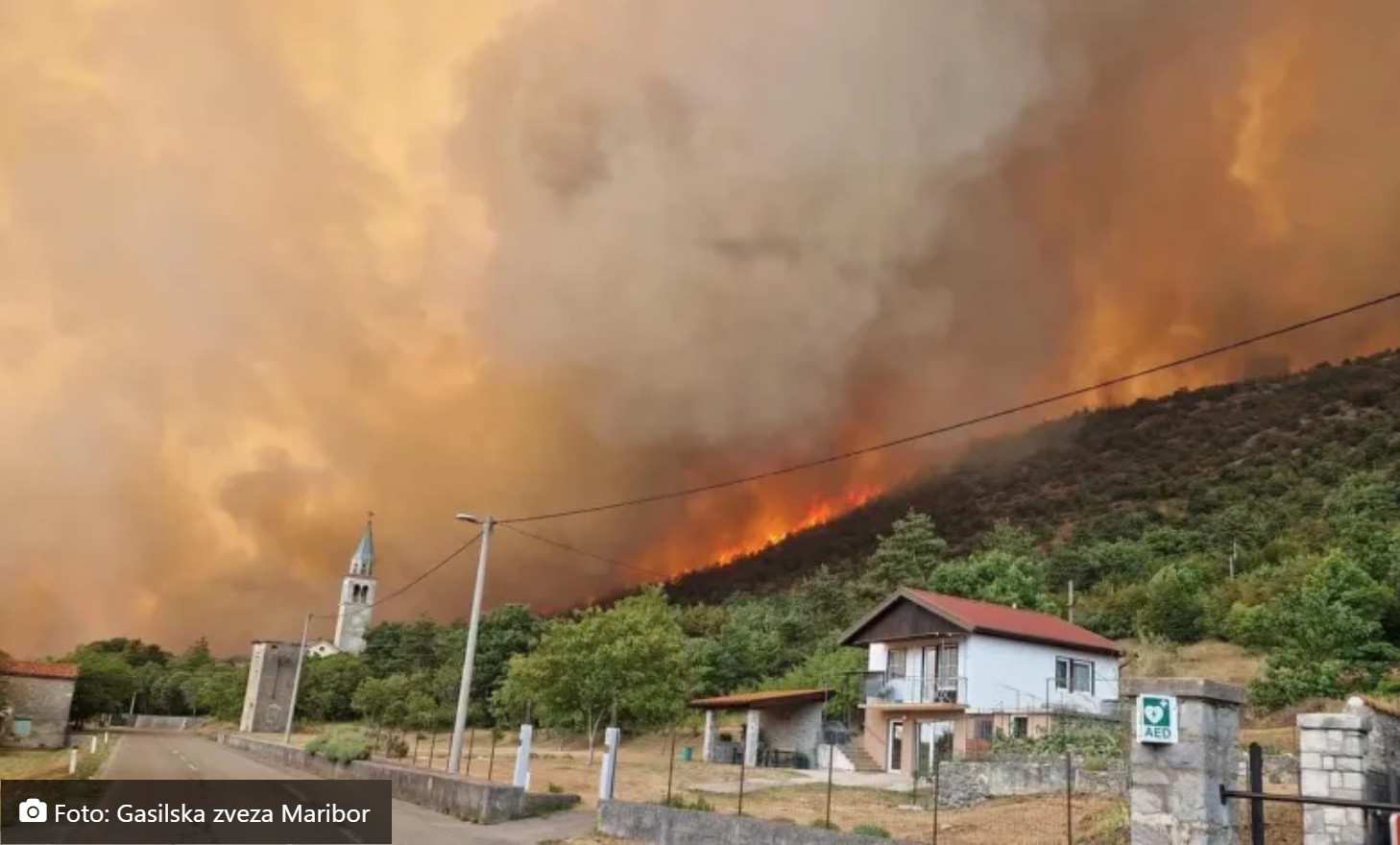 Fig. 1: The wildfire in the Kras region that broke out in mid-July 2022 threatened inhabited places, © dostop.si/Gasilska zveza Maribor.

Analysis of the fire event

Satellite derived products such as LSA SAF FRP are very helpful for wildfire analyses. Figure 2 presents an overview of all detected fire pixels over the wider area where the wildfire was burning in the week 17-23 July 2022. We can distinguish three groups of fire pixels with higher releases of fire radiative power (FRP) in the course of the week. The events with power higher than 300 MW have fire confidence larger than 60 %.

Figure 2 also shows that fires had maximum FRP of around 1000 MW on 20 July 2022. The general pattern of increasing FRP in the morning, peak values in the afternoon and decreasing FRP towards the evening can be observed. FRP and spatial evolution of the fire are of crucial importance for fire fighter in order to find the window of opportunity to tackle the fires.

To get an overview of the fire spatial extent we plotted all active fire pixels in 17-23 July 2022 over OpenStreetmap maps (Fig. 3). An additional layer in the figure is Copernicus Sentinel 2 high-resolution false colour image from Sentinel Hub. The image was taken after the fire had already been extinguished on 1 August 2022. High spatial resolution (10 m pixel size) displays the burnt area and complements the LSA SAF FRP information. Dark areas in the figure denote burnt areas on the Slovenian and Italian sides of the region. Fire pixels (in the figure their centres are shown) encompass all of the burnt area between the cities of Gorizia/Nova Gorica and the Adriatic Sea. As a single satellite pixel is also affected by its neighbouring pixels, hot fire pixels could affect its surrounding pixels (i.e., fire pixels might cover larger area than that of the fire).

We can observe maximum FRP (orange dots) in the centre and southern part of the burnt area. Additionally, several smaller fires were reported by civil protection a bit north of the main wildfire. This is in agreement with what we see in Fig. 3 as two smaller isolated fires can be spotted around Gorizia/Nova Gorica. Smaller fires can be detected since LSA SAF FRP is able to detect FRPs as low as 30 MW. Such power can be released from an area 104 smaller than the pixel size. Dates of fire detection are generally in agreement with reports from civil protection as well as camera recordings from nearby meteorological stations. 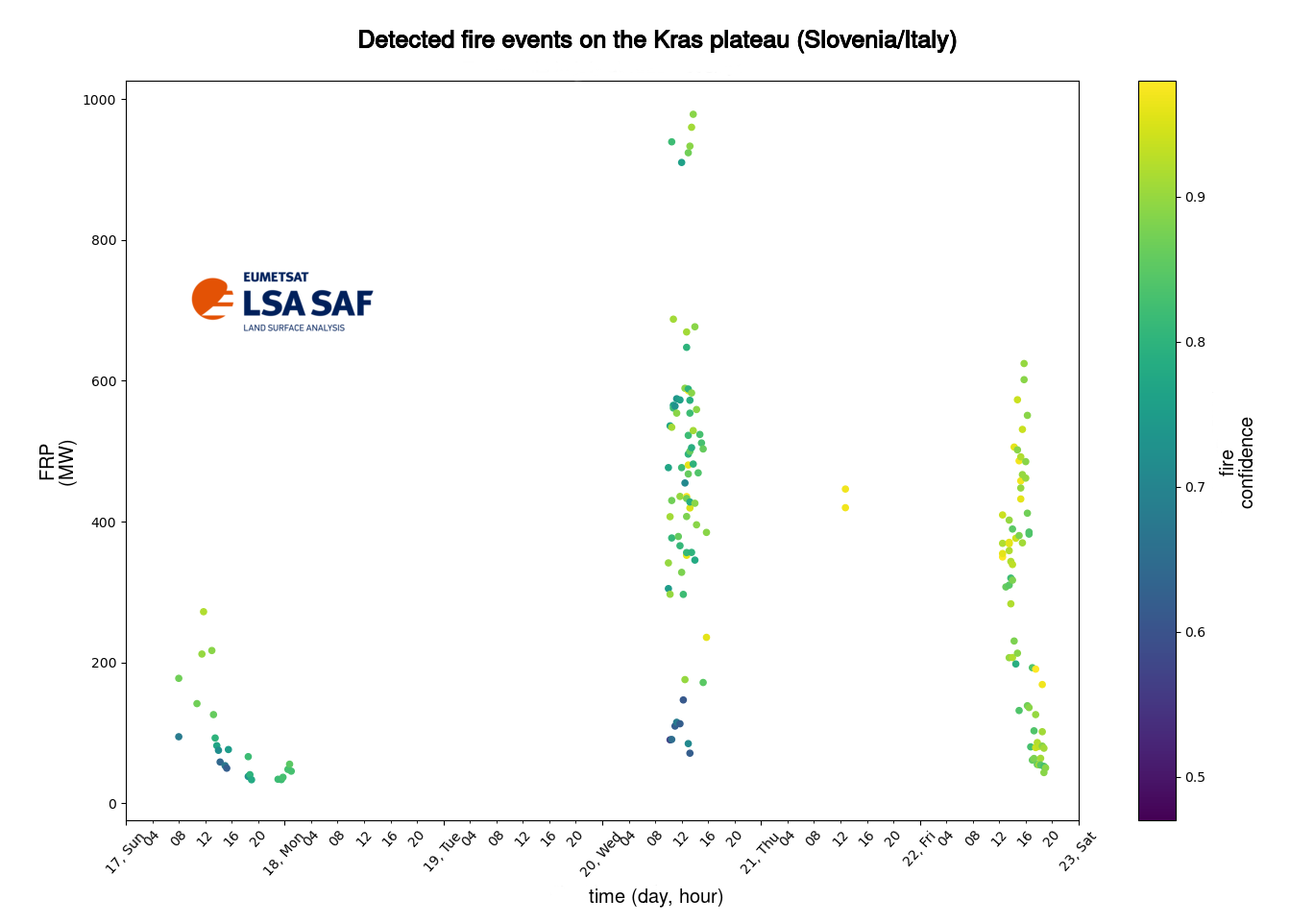 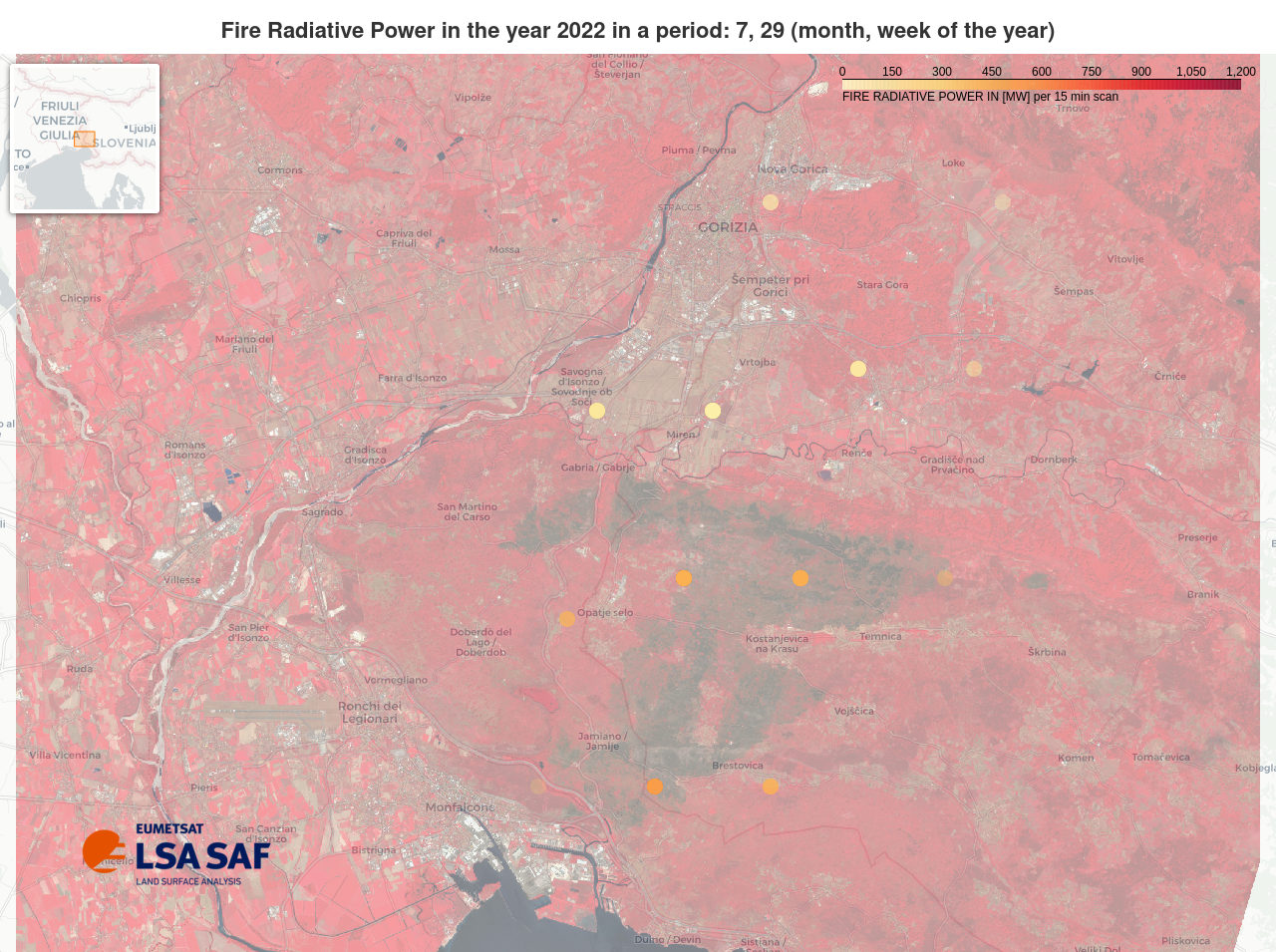 The largest wildfire in Slovenia in recent decades has been studied with the LSA SAF FRP product. We showed that by combining satellite sources with high temporal and finer spatial resolution we can improve our understanding of fire development. Very high temperatures and longer dry periods are becoming more and more frequent and consequentially fire danger is rising in the Mediterranean as well as in other parts of Europe.

Complementing fire pixels with a high-resolution burnt area image from Copernicus Sentinel 2, the LSA SAF FRP proves to be accurate in terms of location. Information concerning radiative power of the fire and its daily cycle can serve as additional input for fire management decision-making. Better temporal and spatial resolution, which will soon be made possible with the EUMETSAT’s MTG mission, fire products will have additional importance, particularly for detecting smaller fires.